Foreign investors are now getting more VND for their buck following recent market fluctuations.  Experts are anticipating a boost to the housing market as investors look to land and gold instead of currency. Turmoil in the Chinese markets has seen the Yuan devalued twice in recent weeks, and Vietnam has reacted quickly to protect its export values.  The State Bank of Vietnam amended the interbank rate between the US Dollar and the Vietnam Dong on August 19th, meaning $1 is now worth 21,890VND, an increase of 1%, while enhancing the exchange rate bandwidth from +/-2% to +/-3%.

This action follows similar moves in January and May of 2015, cumulatively increasing the value of the dollar around 5% over this period.

According to the president of one of Vietnam’s most prestigious real estate companies, the impact is likely to be felt in the property market over both the short-term and long-term.  Mr. Phan Xuan Can of SohoVietnam said:

“These changes will almost certainly result in shifting investment priorities, from currency to assets.  While some will continue to favor purchases of USD and Gold, land and property will attract those looking to accrue dependable value as currency fluctuations impact savings and related interest mechanisms.”

Experts predict the ongoing devaluation of VND will increase still further the influx of remittances from Overseas Vietnamese (known as Viet Kieu).  Estimates of annual transfers into Vietnam from Viet Kieu range from $11-12billion, with around 18% (around $2billion) thought to be immediately directed into property in the names of relatives. 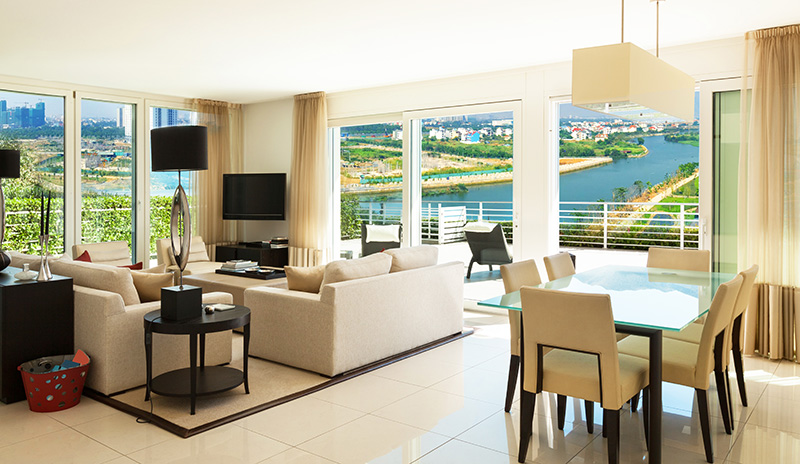 With currency market fluctuations favoring holders of USD coinciding with new housing legislation, allowing Viet Kieu to buy in their own names as well as property purchases by foreigners, Vietnam is poised for significant stimulus by foreign capital.

However, experts don’t expect this stimulus to translate into an inflationary property bubble:

“There is still a substantial amount of unsold inventory,” said Phan Xuan Can.  “it’s still very much a buyers in market, particularly in the luxury housing sector with many condominiums, villas, town houses and ocean villas nearing completion or recently finished.”

Vinhomes Central Park will be finished in 2017

The primary impact on speculators and homeowners of quickly changing cash values will be in lending rates, which could have an indirect effect on property and construction – although baseline costs are unlikely impacted greatly in the short-term.

Most Vietnamese construction materials developers and contracts are locally sourced, meaning foreign currency fluctuations are unlikely to impact their bottom line.  The exception may be developers who source bespoke furniture and materials from abroad, but they are few in number.

So, investment prospects for foreigners and Viet Kieu remain healthy, with the dollar now buying more dong and asset prices being unaffected.

As the market changes, we’ll report on it.  Keep up to date with Vietnamese property market news by commenting your email below or subscribe our newsletters.